Obsessed with playing online slot games? You may want to try out the newest craze. Amusingly called Pretty Kitty Online, this popular online slot game is developed and powered by Microgaming. Just like what its name suggests, its theme is cats and wealth, an unlikely pairing for non-players, though players instantly get its appeal once they have used the platform. It makes use of 5 reels, with players paying within the range of 30p to £75 for each spin. It is also one of the more accessible online slot machines as it is available on desktop, mobile and tablet devices. 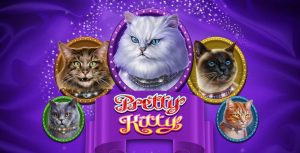 How is Pretty Kitty played?

In Pretty Kitty, the low value symbols are the gemstones while the high value ones are each of the five cats. All the cat symbols are stacked in the base game, which means when a full symbol stack is reached on the first reel, the other appearances of the same symbol will have an expanded value. This is called the Expanding Symbols feature. So if you managed to stack the white Persian cat symbol on the first reel, all other instances in the next reels will benefit.

Another great feature of Pretty Kitty is called Free Spins. Once a player gets more than 2 diamond collar scatters anywhere on the reels, he or she will be getting a reward of 15 free spins. This Pretty Kitty feature can also be retriggered, which means you will get 15 more additional spins on top of your initial reward.

Getting a full stack of the Pretty Kitty symbol on the first reel will also mean that all other wilds on the other reels will expand.

How is it compared to other cat-themed slot games online?

Online slot game experts would be quick to draw comparisons between Pretty Kitty and another cat-themed slot game, Kitty Glitter. There are various similarities, of course, but Pretty Kitty is miles ahead with its fresher game play, sharp graphics as well as bigger chances of winning.

It is also different to Miss Kitty as that game has 50 paylines, with a bigger amount per spin, ranging from 50p to £100. While Miss Kitty also has a Free Spins reward feature, players are less likely to win with it though when they do, it can go as high as $100,000.

So if you are thinking about playing an online slot machine that delivers big wins and also have a cute factor, Pretty Kitty may be the game for you.