Slot games are great when they have an interesting theme. Ancient Egypt has been done so much that most of us probably know the entire Egyptian history without picking up a history book. Treasure Nile Online Slot gives us a unique twist on this classic theme while delivering slick, crisp graphics and a progressive jackpot hidden in there which puts it way ahead of most mobile slot games.

Microgaming went all out to bring you the Egyptian feel and have numerous Egyptian symbols such as the Sphinx, the Nile, sacred scrolls, pyramids, pharaohs, Anubis and hieroglyphics.

The graphics set this game apart in terms of aesthetics but there is nothing new about the gameplay. It’s got 9 paylines, a progressive jackpot and no extra fancy features. Treasure Nile 5-Reel is so simple that beginners can play it as well.

Treasure Nile 5-Reel doesn’t have any bonus rounds or free spins. What it does have are Wild symbols which are pyramid symbols that can swap in for any other symbol except the Golden Scarab beetle which functions as the Scatter symbol. Three or more Scatter symbols on any three reels will earn you up to 50 times your initial bet. 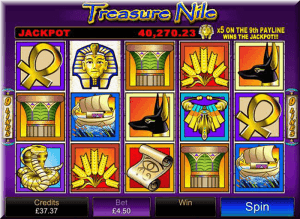 The simplicity of it will put off veteran players. Every spin will cost you 4.50 which is a little high for beginners and very limiting for players who like to bet big. Veteran players love choice. They want to be able to bet up to 100 or more depending on their gut-feeling about the next reel. Switching up your bets makes it worth playing for long periods. Only having one bet makes you get bored rather fast. What’s clear is that this game was designed for players who prefer to make relatively small bets.

Jackpots spice things up however they do not happen randomly. The only way to trigger them is by scoring five King Tut symbols on 9th payline and it is not easy to do.

Treasure Nile online slots has been around since 2004. Microgaming did a splendid job with its display design by putting in the symbols and images however just like most games that look good from the outside, it lacks the kind of depth that makes it engaging. Bonus rounds are known to hold the attention of most gamers however this game chooses to avoid those and entice its gamers with larger payouts such as the progressive jackpot which starts at $40,000 and rises at an impressive rate.